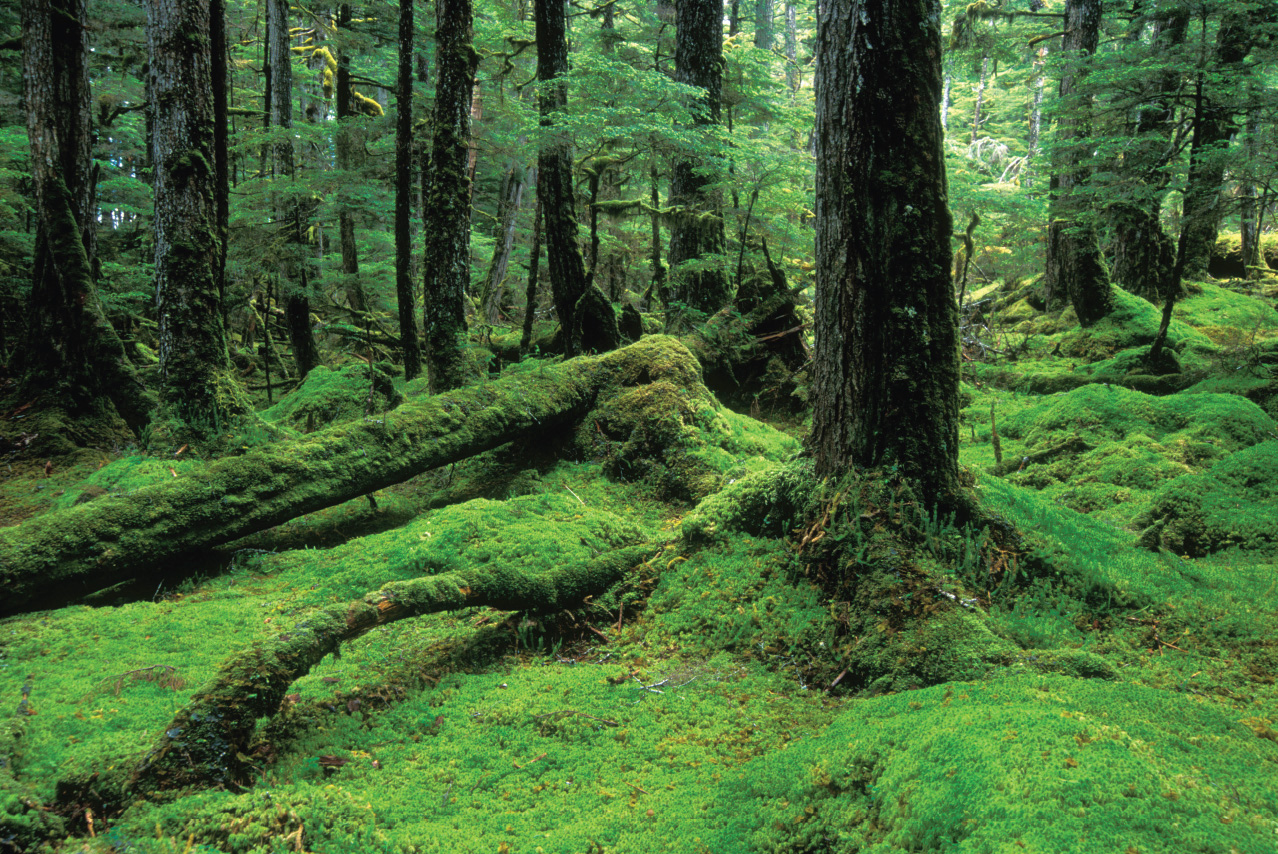 A treasure to its denizens, human and otherwise

The rest of the world and even the sky disappeared as I entered the forest near Ketchikan. A quiet stillness set in, yet I knew the verdant foliage surrounding me was very much alive. I marveled at the lichen hanging from the towering trees—western hemlock, red cedar, Sitka spruce—and the moss clinging to fallen trees and rocks. The rain tried to drip through, but the dense forest canopy blocked much of it. Berry bushes and ferns created the deep-green forest floor, and a crystal-clear creek meandered toward the Pacific Ocean. This incredible stretch of nature is part of the world’s largest rain forest and the nation’s largest national forest.

In the early 1900s, before Alaska was designated as a state, Teddy Roosevelt proclaimed 16.8 million acres of Alaska’s wilderness as the Tongass National Forest. Roughly the size of West Virginia, Tongass has 11,000 miles of shoreline, 15,745 miles of rivers and streams that host runs of anadromous fish, 207,000 acres of lakes and ponds, 19 wilderness areas, and the Hubbard Glacier, the largest tidewater glacier in North America. Annual rainfall varies from 2 to 25 feet, and although the Tongass is a rainforest, 42 percent of it is rock and ice. The varied terrain from high-walled fjords, rugged coastal mountains, and lush forests make the Tongass a true natural and national treasure.

Dr. Glenn Juday, professor of forest ecology at University of Alaska Fairbanks, says temperate rainforests are rare but do occur a few other places in the world. “The cool to cold rainforest climate of Southeast Alaska, the high rates of tree growth, and especially the dominance by needle-leaf conifer trees are some of the Tongass’s most distinctive features.”

The Tongass National Forest is home to three Native groups—the Tlingit, Haida, and Tsimshian—who depend on this land and its resources for their livelihoods. Alaska Natives make up 22 percent of the region’s population and are scattered throughout the 32 communities in the Tongass. Many continue to rely on the subsistence lifestyle that has been a part of their culture for centuries.

Animals are abundant in the Tongass. In fact, there are no threatened or endangered species anywhere in the forest. The highest density of brown bears in the world live on Admiralty Island. There are more bears in this one area than in the entire lower 48 states. Large populations of bald eagles also thrive in the Tongass; in fact, the Alaska Chilkat Bald Eagle Preserve near Haines preserves habitat for the world’s largest concentration of our national bird. Moose, beaver, wolves, foxes, and porcupines also roam. Along shorelines Sitka black-tailed deer, and brown and black bears forage for food, while in the mountains above timberline, mountain goats scale the steep rocks.

“In today’s world, the ecological intactness of the Alaska rainforest is essentially unique,” says Juday. “Few sections of the world’s coastline are less developed; few areas have a lower road density. Almost no other part of the world has major streams and rivers with so few dams, low pollution, and such large and intact runs of anadromous fish as those found in the Tongass.”

Salmon are numerous here and essential to the ecosystem, commerce, and the people. Five varieties of Pacific salmon—chum, coho, king, pink, and sockeye—are native to the Tongass, which produces nearly 80 percent (about 49 million fish) of Southeast Alaska’s annual commercial harvest of salmon.

The combined economic impact of commercial, sport, and subsistence fishing for salmon, along with hatchery operations, creates a billion-dollar industry. Plus, the inhabitants of the Tongass, especially those in rural communities, rely heavily on the annual runs to provide great portions of their diets. It is estimated that a resident consumes an average of 75 pounds of salmon each year. This is quite a bit higher than the U.S. average of 15 pounds of seafood per person per year.

Due to the cultural, environmental, and economic importance of the Tongass, maintaining its health is a long-term priority. The U.S. Congress has designated more than one-third of the Tongass, nearly six million acres, to be managed as wilderness in perpetuity for years to come.

Kent Cummings,  of  the U.S. Forest Service says, “The magnificence and scenic beauty of wilderness landscapes, along with their values as intact ecosystems, make these areas important for local residents, visitors, recreationists, scientists, and researchers. We are committed to managing these areas for the use and enjoyment of future generations.”

A rainforest such as the Tongass National Forest is rare and if nurtured will continue to be a special place for those who live and visit.

Kerrie Flanagan is a freelance writer from Colorado (www.kerrieflanagan.com) and the founder of Hot Chocolate Press (hotchocolatepress.com).