(Southeast Alaska) Skagway is located on the north end of Taiya Inlet on Lynn Canal, 2-1/2 hours by fast ferry or 90 air miles northwest of Juneau; 108 road miles south of Whitehorse, YT, via the South Klondike Highway. Skagway is 15 miles by water and 359 miles by road from Haines.

Skagway is the oldest incorporated city in Alaska (1900). In July 1897, the first boatloads of gold stampeders bound for the Klondike landed at Skagway and Dyea. By October 1897, Skagway had grown to a population “of about 20,000.” By the summer of 1899 the stampede was all but over. The newly built White Pass & Yukon Route railway reached Lake Bennett, supplanting the Chilkoot Trail from Dyea. Skagway persisted, both as a port and as terminus of the White Pass & Yukon Route railway, which connected the town to Whitehorse, YT, in 1900. Cruise ships, and later the Alaska State Ferry System, brought tourism and business to Skagway. Scheduled state ferry service to southeastern Alaska began in 1963.

Skagway has a post office, gas station (with diesel), a hostel and several churches. There is 1 bank in town with an ATM. There are several restaurants, cafes and bars; a grocery and True Value Hardware; the Klothes Rushclothing store; and many gift and novelty shopsoffering Alaska and gold rush souvenirs, photos, books, gold nugget jewelry, furs and ivory. The Skaguay News Depoton Broadway carries books and newspapers.

Skagway offers a variety of accommodationsfrom hotels to bed and breakfasts, including the historic Skagway Innand At the White HouseB&B in town, and Chilkoot Trail Outposton Dyea Road. RV camping at Garden City RV Park. A tent campground is located near the Chilkoot Trail trailhead near the old townsite of Dyea on Dyea Road. 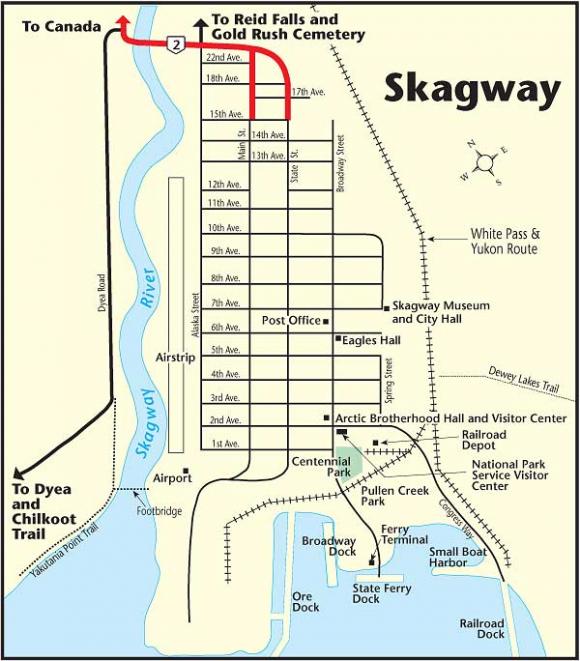