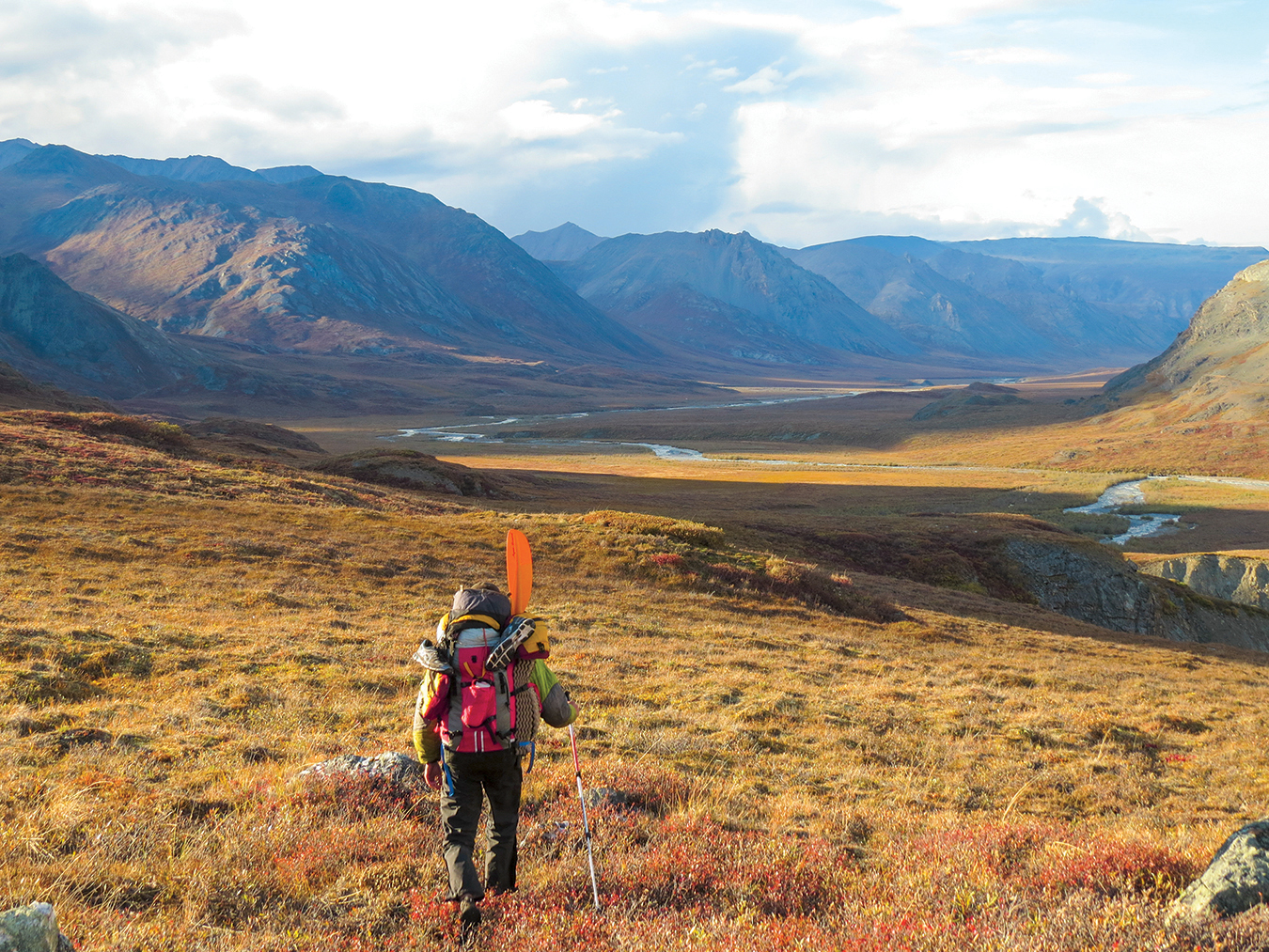 After getting turned around in the North Slope of the Brooks Range, the intrepid hikers opted for a different route, which began at the headwaters of the Hulahula River.(photography by Bjorn Dihle)

My friend Ben and I stood at the edge of Arctic Village’s dirt runway in the howling wind. It was mid-August and winter edged closer. Silhouetted above the eerie taiga, far to the north, rose the ancient gray and brown mountains of the Brooks Range. We walked through the Neets’aii Gwich’in village, complete with caribou racks hanging from satellite television dishes. Folks on four-wheelers paused for conversations and laughs when we admitted our plan to walk 250 miles across the Brooks Range to Kaktovik, an Inupiaq village on Barter Island in the Beaufort Sea. An hour later we were alone, except for swarms of mosquitoes, in the tussocks and spindly black spruce forest. In a way, though neither of us said it, this was Ben’s farewell to Alaska. After 10 years of living in the north he planned to relocate in Seattle to attend law school.

We traveled light, without a stove, hoping to stretch our food for up to 20 days. The route we planned would follow the east fork of the Teedriinjik River to its source, climb over a mountain pass, cross the Sheenjek River and follow the Kongakut River to the ocean. This country had been officially designated the Arctic National Wildlife Refuge (ANWR) in 1960.

The following day, after hours of tussocks, swamps and swarms of mosquitoes, we bumped into a blond grizzly bear.

“Back up,” I whispered to Ben, who hiked in the lead with his head down. Slowly, we flailed through a swamp and edged around the bear.

“My adrenaline’s worn off and I’m even more tired now,” Ben said a short while later. A herd of Dall sheep grazed on a slate-gray mountain slope above. We traveled on, crossing swift creeks and rivers, as storm clouds rolled in. We crossed into the true Arctic, where brutal winds and cold keep all but the smallest and hardiest plants from growing. The scrubby forest vanished, tussocks turned into arctic tundra and the river turned into a creek. The willows and tundra blazed orange and red. Lone caribou began to appear, often coming close to investigate. We had less than 200 miles to go to Kaktovik now. 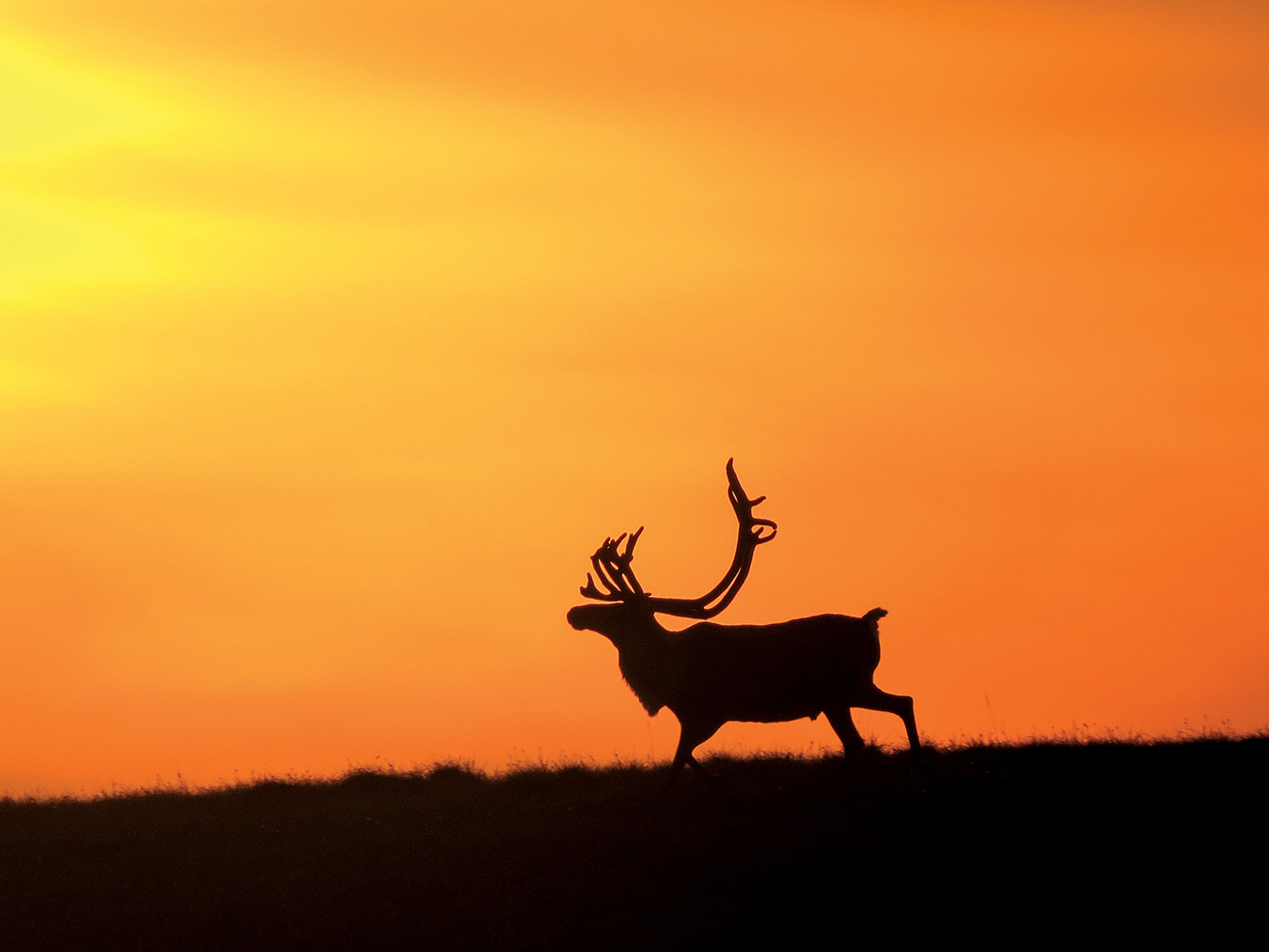 A bull caribou, framed by the setting sun, visited the author’s campsite, pitched not far from Kaktovik.

Near the base of a mountain pass leading to the headwaters of the Sheenjek River, we woke to heavy winds and snow. Following our route, we climbed a gully of loose rocks into a blizzard, gained a ridge and promptly got turned around. Hours later, drenched and shivering, we descended into the wrong valley, where we found enough snow to inspire us to try a shorter route to Kaktovik following the Hulahula River.

Under a mercifully blue sky, we hiked trails recently made by a massive caribou herd, then, in a snowstorm, climbed to the top of the Continental Divide. The next morning, the sun bathed snowy mountains in pink light, and even better, three Dall sheep rams hung around while we broke camp. We entered a stark yet beautiful dreamlike expanse of mountains and valleys so wild it made my skin tingle. The tallest mountains of the Brooks Range towered above as we clambered over a ridge to the headwaters of the Hulahula. When the river narrowed to little more than a creek, we inflated packrafts. A grizzly bear digging in a gravel bar stood to get a better look at us before thundering up a mountain. By the end of the day, with near constant whitewater, I felt like a partly frozen and fully drowned rat. The next day, after a short, spooky and freezing stint on the river, we portaged some bigger rapids.

“You mind if we walk a while?” I asked, my teeth chattering. We spent the rest of the day climbing out of the mountains, edging around a yellow grizzly grazing the reddened tundra for blueberries, and at dusk, we made it into the foothills. An array of waterfowl, including snow, greater white-fronted and Brant geese, began to appear. The following morning we floated, but the river stayed fast, with frequent sets of whitewater.

While packrafting the Hulahula, Dihle and Crozier surprised a flock of greater white-fronted geese.

Near a few shacks, the river suddenly spread into numerous branches too shallow to float. Here, six years prior and during a month-long, west-to-east ski traverse of the eastern Brooks Range, Ben and I had been pinned down by savage winds for a few days. The first day of that journey, the ambient temperature was at least minus 50 degrees Fahrenheit. We passed a herd of musk ox that formed a half-circle defense, their breath turning into ice-fog. In the twilight, Ben stared morosely at his fingers. Every tip had become frostbitten.

On the tenth day of that trip, the mountains became trampled with the trenches and trails of thousands of caribou. Wolverine and fox tracks led from one wolf-killed caribou carcass to the next. A skittish herd numbering around 100 materialized like gangly ghosts on a mountainside. That evening, a caribou leapt out of the willows. A moment later a large wolf followed. The pregnant cow caribou plowed through deep snow and nearly fell when it reached the wind-hardened snow of the river. The wolf froze, stared at us intensely then trotted toward a distant herd of caribou bathed in alpenglow. A strange whistling rolled over the ice. Suddenly, we were surrounded by wolves giving chase. They plowed heavily through snow and ran over river ice, their tongues lolling.

On the Marsh Fork of the Canning River we were forced to ford thigh-deep water numerous times in sub-zero temperatures. A few days later Ben’s foot swelled and a hole erupted, gushing pus and exposing bone. The wound became more debilitating as the miles and days passed.

The sun burned red and orange beyond the Shublik Mountains as we traversed the last pass of that journey. The drainage ahead spread into a wide lonesome sweep. No wildlife, not even the ubiquitous willow ptarmigan, broke the tedium. We’d emerged, hammered by gale-force winds, onto a stretch of coastal plain that looked like a frozen rough sea. I stared out on the ghostly world, baffled by the lack of contrast. That night we made it to the shacks above the Hulahula River. Ben, after skiing 150 miles with a big hole in his foot, was understandably weakened. I considered skiing to Kaktovik to get help, but Ben would have likely shot me if I’d tried.

When the wind lulled for a moment, we slogged on toward the coast. Soon a blizzard set in, and I was met with the eerie sight of a giant snowy owl circling just a few yards above my friend.

Ben Crozier poses with a caribou rack he found during a 250-mile hike through the Arctic National Wildlife Refuge.

Six years later, as we neared Kaktovik, Ben and I felt like we were on an ANWR pleasure cruise. That night a great bull caribou ran circles around us as the sunset bathed the tundra in crimson. The coastal landscape teemed with tundra swans, sandhill cranes, short-eared owls and a plethora of other birds. Ben sat atop a small knoll, waiting for me to catch up, and stared out at Kaktovik in the evening light as a pair of owls circled him.

The following morning we planned to spend a few hours with friendly locals, watch heavy machinery work and survey polar bears lying on nearby barrier islands waiting for hunters to haul a whale ashore. Then we’d say our goodbyes and hop onto different planes bound for two very different lives.

But right then, it felt like the land was giving us a gift neither of us would forget. A moment later, dark clouds blocked the sun and broke the gentle spell. We shouldered our packs, looked southward as a storm slowly swallowed the mountains. We hiked on, soon engulfed by gray and rain, toward Kaktovik.

Bjorn Dihle is a Juneau writer. Check out the preview of his first book, Haunted Inside Passage, and follow him at www.facebook.com/BjornDihleauthor 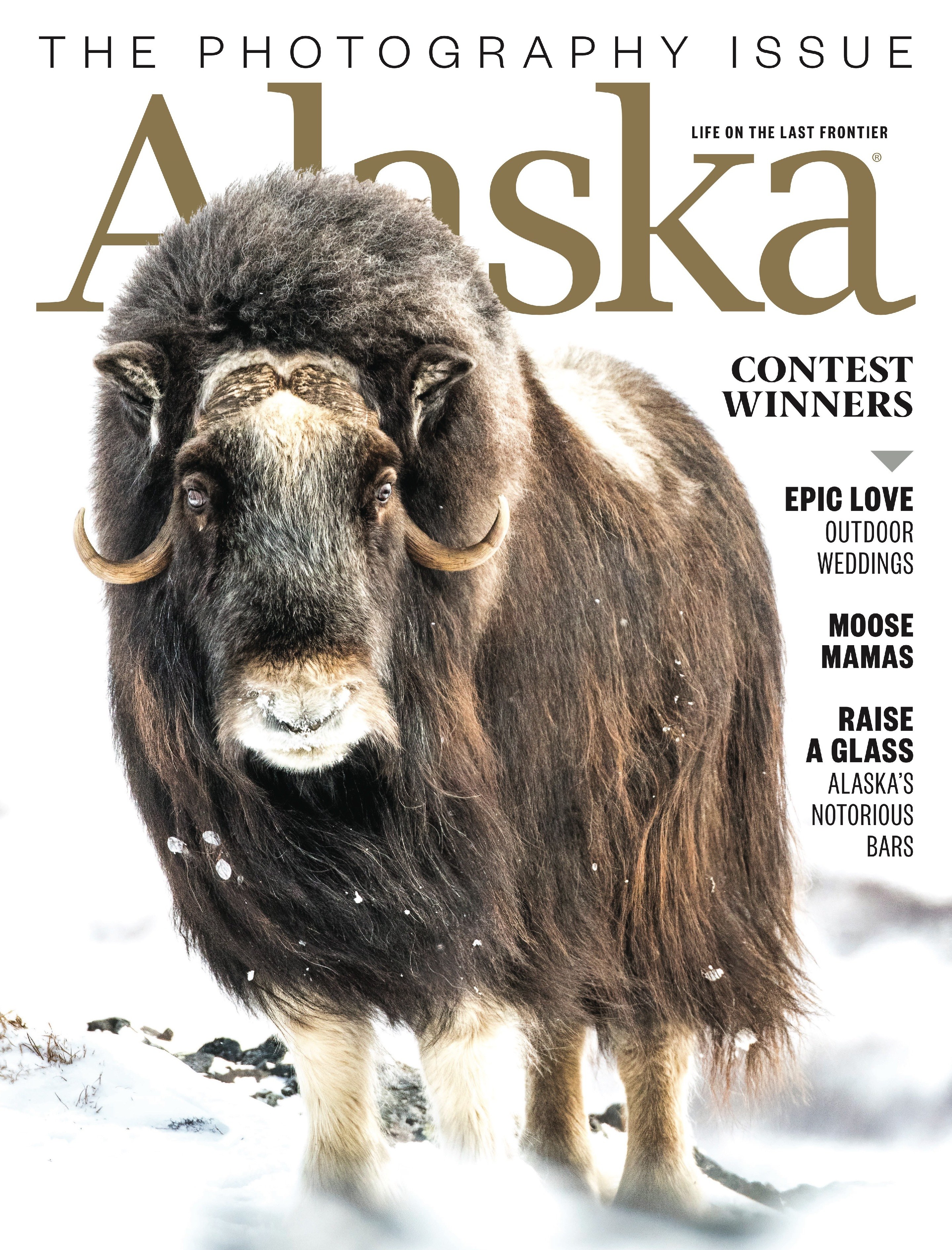 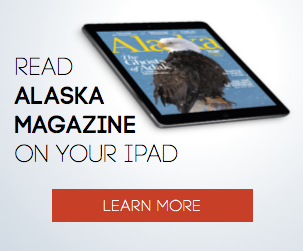